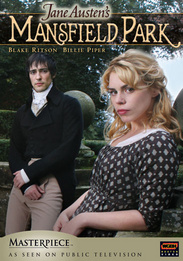 In one of Jane Austen's most complex plots, Billie Piper (Doctor Who, The Ruby in the Smoke) stars as Fanny Price, who goes to live with prosperous relatives at Mansfield Park. Fanny navigates a labyrinth of intrigues and affairs among the occupants of the house, while her cousin Edmund Bertram, played by Blake Ritson (Inspector Lynley Mysteries) remains her stalwart confidant.