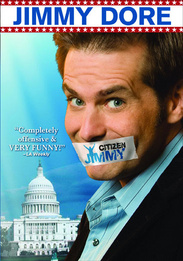 Jimmy Dore's hilarious, topical take on all the ills of the country, from George W. Bush's well hidden genius, to health care, gas prices, Dick Cheney, and Christian Preachers who rail against gay marriage before getting caught in an Airport restroom, Citizen Jimmy pulls no pre-emptive punches in dealing with the insanity of our times, and the ridiculousness of our leaders. Whether youâre a Democrat or a Republican, Jimmy is an equal opportunity offender. Jimmy Dore, the writer/performer for the off-Broadway hit âThe Marijuana-Logues,â was born into a Catholic family of twelve in a very blue-collar neighborhood on the south side of Chicago. Tagged a rebel for occasionally reading a book and thinking for himself, Jimmy quickly turned to comedy to ease the pain of the beatings. After moving to Los Angeles in 1995, he broke into television with a flurry of appearances on basic cable and then quickly moved to network TV in '97 with an appearance on NBC's âFriday Night Videos.â He soon became a show favorite, returning five times over the course of the next year. He has been invited to perform at some of the most prestigious comedy festivals and in 2003 he made a stand out performance at the HBO US Comedy Arts Festival in Aspen, Colorado. The Hollywood Reporter said Jimmy was among the five comics at the festival that generated the most âbuzz.â Since then, Jimmy has made continued appearances on late night television, including âThe Late Late Showâ on CBS and âJimmy Kimmel Liveâ on ABC.