How I Met Your Mother: Season 3 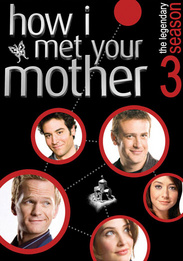 The woman of his dreams is out there â the question is, who is she? Told in a series of flashbacks, âHow I Met Your Motherâ is the hilariously unpredictable story of how twenty-something Ted meets his soul mate and says goodbye to the singlesâ world of pick-up lines, one night stands and relationship âdeal-breakers.â Things have a funny way of working out in this delightfully fresh and fast-paced comedy.