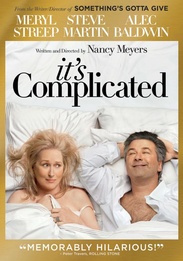 Two-time Academy AwardÂ® winner Meryl Streep, Steve Martin and Alec Baldwin star in this hilarious look at marriage, divorce and everything in between. With a thriving Santa Barbara bakeshop, a new romance heating-up, and her divorce finally behind her, Jane Adler has her life all figured out â until she finds herself trapped between the perfect new beau and her philandering ex-husband whoâs determined to win her back. When opposites attract all over again, will love be sweeter the second time around? Itâs... complicated!