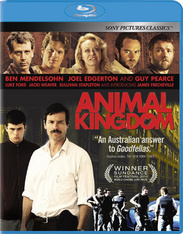 Welcome to the terrifying Melbourne crime underworld, where tensions are on the brink of exploding between felons and renegade cops - the Wild West played out on the city's streets in broad daylight. The Cody brothers, a gang of armed robbers, are in the process of initiating their teenage nephew Joshua 'J' (James Frecheville) into their frightening world after the death of his mother and under the watchful eye of his matriarchal grandmother, Smurf (Jacki Weaver), a modern-day Ma Barker.

Ben Mendelsohn plays Pope, the oldest brother of the Cody clan, who tries unsuccessfully to come to terms with the fact that his partner and best friend, Barry 'Baz' Brown (Joel Edgerton), wants out of the game. Craig (Sullivan Stapleton), the middle brother with a hair trigger, deals and does cocaine while the youngest brother Darren (Luke Ford) fights with his conscience as he participates in the family business. All of them are adored, sustained and supported by Smurf, who seems to be pulling the strings.

J quickly comes to believe that he is a player in this world, but soon discovers that the entire situation is far larger and more menacing than he could ever imagine. Guy Pearce plays senior police officer Nathan Leckie, who, recognizing that J's youth and inexperience might well prove to be the key to finally conquering the Codys, tries to lure him into the fold after the death of a close associate. In order to survive, J must determine how the game is played and choose his place in this cunning and brutal animal kingdom.