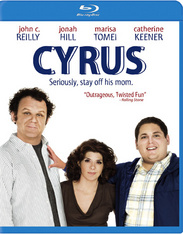 With John's social life at a standstill and his ex-wife about to get remarried, a down-on-his-luck divorcee finally meets the woman of his dreams, only to discover she has another man in her life - her son. Written and directed by Jay and Mark Duplass, the iconoclastic filmmaking team behind Sundance Film Festival favorite THE PUFFY CHAIR, CYRUS takes an insightful, funny and sometimes heartbreaking look at love and family in contemporary Los Angeles.

Still single seven years after the breakup of his marriage, John (John C. Reilly) has all but given up on romance. But at the urging of his ex-wife and best friend Jamie (Catherine Keener), John grudgingly agrees to join her and her fiance Tim (Matt Walsh) at a party. To his and everyone else's surprise, he actually manages to meet someone: the gorgeous and spirited Molly (Marisa Tomei).

Their chemistry is immediate. The relationship takes off quickly but Molly is oddly reluctant to take the relationship beyond John's house. Perplexed, he follows her home and discovers the other man in Molly's life: her son, Cyrus (Jonah Hill). A 21-year-old new age musician, Cyrus is his mom's best friend and shares an unconventional relationship with her. Cyrus will go to any lengths to protect Molly and is definitely not ready to share her with anyone, especially John. Before long, the two are locked in a battle of wits for the woman they both love - and it appears only one man can be left standing when it's over.

Using the innovative improvisational techniques that have earned them critical accolades and a devoted following, Jay Duplass and Mark Duplass enter the mainstream with a touching, original story that blends humor and heartbreak, much like life itself.

Rated R for language and some sexual material.