You May Not Kiss the Bride 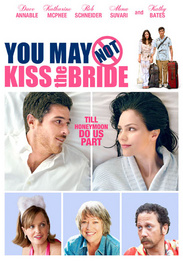 An unassuming pet photographer is thrown into serious action, adventure and romance when he is forced to marry a Croatian bride (Katherine McPhee) and spend his honeymoon on a remote Tahitian resort, where he must rescue her after she is kidnapped.

Rated PG-13 for sexual material and references, some rude humor and violence.