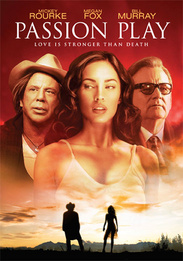 A terrific cast will hold you spellbound in this one of a kind seductive thriller from the screenwriter of The Recruit. The last thing washed-up jazz musician Nate Pool (Academy Award-nominee Mickey Rourke, The Wrestler) wanted to do was betray sinister gangster Happy Shannon (Academy-Award-nominee Bill Murray, Lost in Translation).

But it may be the last thing he does unless he can deliver Lily (Megan Fox, Transformers), a beautiful and mysterious carnival sideshow attraction. The stakes can't get any higher for the two lovers as they try to elude the merciless killer who will stop at nothing to keep Lily for himself. Kelly Lynch (Drugstore Cowboy) and Rhys Ifans (Notting Hill) costar in this gritty and unpredictable tale of redemption in the hard-boiled tradition of classic film noir.

Rated R for language, some sexuality/nudity, violence and brief drug use.