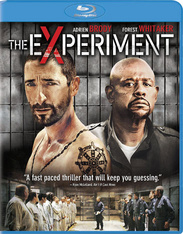 Academy AwardÂ® winners Adrien Brody and Forest Whitaker star in the adrenaline-charged drama The Experiment. The shocking psychological thriller unfolds when 24 men are chosen to participate in the roles of guards and prisoners in a study designed to evaluate the affects of power and control. Values are tested and lines are crossed when seemingly normal participants are pushed to the breaking point as the experiment spirals out of control. The powerful remake of the 2002 German film Das Experiment co-stars Clifton Collins Jr., Cam Gigandet and Maggie Grace.

Rated R for strong disturbing violence including a rape, language, some sexual content and nudity.