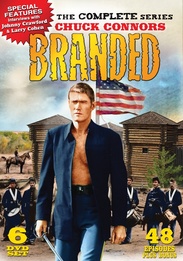 In Branded, Chuck Connors plays the part of Captain Jason McCord, West Point graduate and decorated Cavalry officer. As the sole survivor of the Battle at Bitter Creek, an Apache Indian massacre, he is judged to have deserted the field of battle and is stripped of his rank. He is branded a coward and disgraced in the eyes of the world.

McCord roams the West in search of redemption and justice, for others and ultimately for himself. His exciting travels take him into the lives of many others searching for the dream of the American West. He moves from one town and job to the next, plying his training as an engineer. He always takes the time to lend a hand, to right a wrong and to stand up to injustice. From time to time, President Ulysses S. Grant recruits him for daring undercover missions, which he courageously undertakes, but his disgrace and shame follow him wherever he goes.

Branded is true Western classic and Chuck Connors as Jason McCord is the epitome of the American spirit; rugged and courageous. He is unafraid to take on any task and through his strength and will, he is able to overcome whatever odds are placed before him.