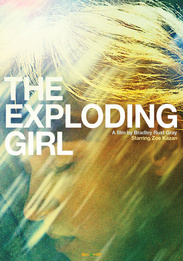 In her first leading role, Zoe Kazan (ITâS COMPLICATED, REVOLUTIONARY ROAD) plays Ivy, a twenty-year-old college student home for spring break. Sheâs excited about a developing romance back at school and life is seemingly perfect. When her longtime friend Al finds himself without a place to stay during the break, Ivy and her mother take him in, and Al and Ivyâs friendship strengthens while her boyfriend grows more and more distant. Increasingly distressed about her conflicting feelings, Ivy struggles to keep control, not wanting to overwhelm her emotions and trigger her epilepsy. Restrained and meditative, THE EXPLODING GIRL is an exquisite portrait of a young girl coming of age and finding a deeper kind of love in New York City.