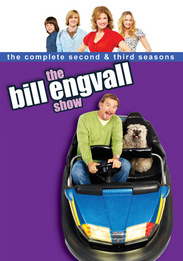 Blue Collar Comedy Tour's breakout star Bill Engvall created, executive produces and stars as Bill Pearson, a family counselor who could use some counseling of his own to deal with his unconventional brood in this family-centered sitcom. TV titans Nancy Travis and Tim Meadows costar as wife and pal, while a pre-superstar Jennifer Lawrence (The Hunger Games) plays his precocious and pugnacious teenage daughter. Graham Patrick Martin and Skyler Gisondo round out the clan as Bill's boys: one a slacker, the other sly. This 3-Disc, 22-Episode Collection delivers up the remaining seasons of this TV favorite to a clamoring crowd of comedy fans hungry for some savory, old-fashioned family fare. In the final two seasons, the Pearsons face challenges both ordinary and unexpected, from the proper allowance to chore ratio and the horrors of prom to using Facebook to spy on your kids and a sudden, frightening downturn in the family finances.