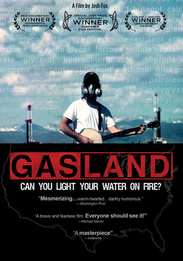 Filmmaker Josh Fox grew up in the verdant woods of the Delaware River valley. In 2009, he learned his land was on top of the Marcellus Shaleâa giant reservoir of natural gas that stretches across the Appalachiansâand that he would be paid to lease his land for natural gas extraction.

Part mystery, part travelogue, and part banjo showdown, GASLAND documents Joshâs cross-country odyssey to find out if the controversial process of hydraulic fracturingâor frackingâis actually safe. As he interviews people who live on or around current fracking sites, Josh learns of things gone horribly wrong, from illness to hair loss to flammable water, and his inquiries lead him ever deeper into a web of secrets, lies, conspiracy, and contamination.

Unearthing a shocking story about a practice that is understudied and inadequately regulated, GASLAND races to find answers about fracking before itâs far too late.