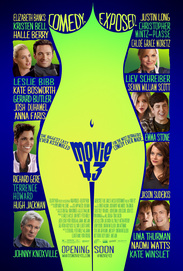 Warning: This movie is not for the weak-stomached, faint of heart, or easily offended. In Movie 43, comedy is served steaming hot by director Peter Farrelly of The Farrelly Brothers (Something About Mary, Dumb & Dumber) in one of the most original comedies ever made.

Rated R for strong pervasive crude and sexual content including dialogue, graphic nudity, language, some violence and drug use.