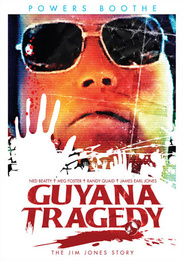 Without Me You Are Doomed To A Life Of Eternal Agony! - Jim Jones

Jonestown, Guyana, December 18, 1978: Self-appointed messiah Jim Jones takes his own life along with 913 members of The People's Temple in the most horrific mass-murder-suicide of the 20th century!

Indianapolis Indiana, 1964: Young idealistic minister Jim Jones provides tireless service to the desperately needy and gains a devoted congregation. The power of the charismatic leader grows rapidly with his "People's Temple." Jim is worshiped by the congregants and uses the young pretty ones as his personal harem. As his drug-induced delusions of divinity spiral out of control, Jim learns that U.S. congressman Leo Ryan is planning an investigation into the workings of The People's Temple!

Powers Boothe won an Emmy Award for his chilling portrayal of Jim Jones in Guyana Tragedy. Boothe has portrayed unforgettable evil characters such as "Curly Bill" Brocius in Tombstone (1993), and Cy Tolliver on the HBO series Deadwood (2004-2006). The Story Of Jim Jones has an all-star supporting cast highlighted by James Earl Jones as Father Divine.