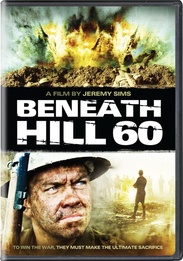 Based on an extraordinary true story of 10 untrained soldiers, the internationally acclaimed BENEATH HILL 60 is the epic tale of ultimate sacrifice in one of the bloodiest trench battles ever fought. Following its Cannes premiere, one of last years most internationally acclaimed war films and a Best Feature winner at both the Savannah and Hamptons Film Festivals, debuts on DVD this June from Entertainment One. Authentic and action-packed, home audiences will be transported back to the enemy lines of 1916 as the Great War rampages across Europe. While blood and carnage rage on the surface, a deadly game of cat-and-mouse is being played out thirty meters below the trenches as a small, secret platoon of Australian tunnellers prepare to ignite the largest stockpile of explosives ever collected in one place to change the course of the War. And, as zero hour approaches, the Commanding Officer must decide who will make the ultimate sacrifice in this powerful film from director Jeremy Sims, nominated for a dozen Australian Film Institute Awards, including Best Film, Best Director and Best Actor. The DVD also includes a Making Of featurette and cast/crew interviews.

Rated R for some war violence and language.