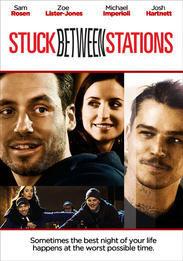 Casper, a young soldier home on leave, has a chance run-in with his childhood crush, now a grad student coping with conflicts of her own. In one night, the two traverse a striking Minneapolis cityscape, growing closer but knowing they will inevitably have to part ways at dawn. Featuring standout performances by rising indie stars Zoe Lister-Jones (BREAKING UPWARDS), and Sam Rosen (FOUR BOXES), and supported by Josh Hartnett and Michael Imperioli ("The Sopranos"), STUCK BETWEEN STATIONSis a touching and authentic snapshot of a generational zeitgeist.

Rated R for language throughout and some drug content.