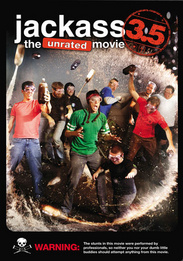 Because too much is never enough! The boys of jackass are at it again with an all-new UNRATED movie loaded with even more outrageous stunts, stupids, and never-before-seen pranks and mayhem, including Steve-Oâs up-close and personal encounter with a snapping turtle, Chris Pontius and his incredible wood pecker, and an electrifying game of limbo with the whole gang. Plus, get an inside view of paranoid life on the jackass set and the successful behind-the-scenes prank that was finally pulled on Johnny Knoxville.