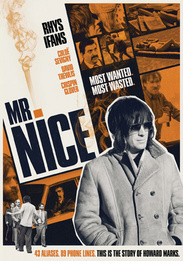 During the mid-1980s Howard Marks (Rhys Ifans) had forty-three aliases, eighty-nine phone lines and owned twenty-five companies throughout the world. Whether bars, recording studios or offshore banks, all were money laundering vehicles serving the core activity: dope dealing. At the height of his career he was smuggling consignments of up to thirty tons of marijuana from Pakistan and Thailand to America and Canada and had contact with organizations as diverse as MI6, the CIA, the IRA, and the Mafia. 43 aliases, 4 kids, 89 phone lines, 25 companies through the world and over one million books sold. We follow Howardâs prodigious rise. And fall. This is the frequently hilarious, occasionally sad, and often surreal story of Howard Marksâ life so far.