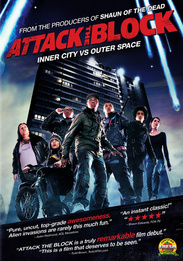 From the producers of Shaun of the Dead and Hot Fuzz, ATTACK THE BLOCK follows a gang of tough inner-city kids who try to defend their turf against an invasion of savage alien creatures, turning a South London apartment complex into an extraterrestrial warzone.