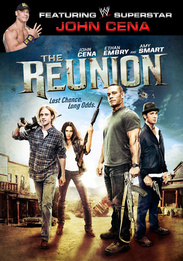 The Cleary brothers, Sam (JOHN CENA), Leo (ETHAN EMBRY) and Douglas (BOYD HOLBROOK) take dysfunctional families to a new level: Sam and Leo have grown up hating each other and neither likes their juvenile delinquent kid brother, Douglas, to whom theyâve only recently been introduced. The sons share the same father, a womanizing drunk, but all have different mothers. Their father died a rich man and when theyâre brought together by their sister Nina (AMY SMART) to learn which of them will inherit the old manâs fortune, they are handed an unpleasant surprise. A requirement of the will is that the three estranged siblings go into business together as bail bondsmen. Their first job is to bring in a parole violator who has left Leo with a $250,000 debt. Their search will take them into the mountains of Mexico where they encounter a drug lord and uncover a kidnapping plot, masterminded by an embittered entrepreneur (MICHAEL RISPOLI) that will endanger them all.