The Closer: The Complete Seventh and Final Season 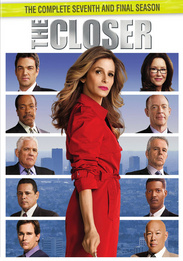 The final season of the critically acclaimed series stars EmmyÂ® winner Kyra Sedgwick as Deputy Police Chief Brenda Leigh Johnson, a top-notch investigator who has put some of Los Angeles' most brutal killers behind bars. With her keen investigative instincts and brilliant interrogation techniques, Brenda often closes her cases by eliciting a confession or cornering a suspect through sometimes-questionable methods. Now, her career may be on the line as a result of her frequently unorthodox methods, and her tactics are coming under the scrutiny of the L.A.P.D.'s new Chief of Police, who is on the verge of announcing an extensive reorganization that could spell the end of Major Crimes. Joining the series in a starring role this season is two-time OscarÂ® nominee Mary McDonnell as Captain Sharon Raydor.