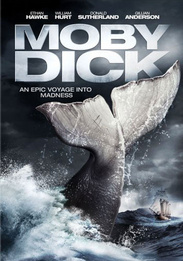 Ishmael sees his dream of a whaling voyage come true when he joins the crew of the Pequod, a sailing vessel leaving port in Nantucket. Unbeknownst to Ishmael and the mates, the Pequod's monomaniacal Captain Ahab is taking them all on a mad and personal mission to slay the great whale Moby Dickâan obsession that will open their eyes to the wonder and spectacle of man, of beast, and the inescapable nature of both.