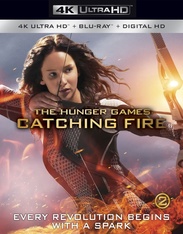 In the thrilling sequel THE HUNGER GAMES: CATCHING FIRE, Katniss Everdeen and fellow tribute Peeta Mellark have barely returned home after winning the 74th Annual Hunger Games when they are whisked away once again by the Capitol. Forced to leave her family and best friend Gale, Katniss is dispatched on a victory tour of Panem with Peeta, where rebellion is seething in all 12 districts. The Capitol is enraged and ready to strike back... as President Snow prepares the most diabolical edition of the Hunger Games yet.

Rated PG-13 for intense sequences of violence and action, some frightening images, thematic elements, a suggestive situation and language.