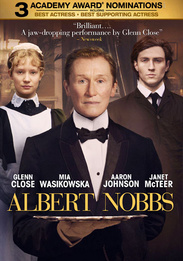 Award winning actress Glenn Close (Albert Nobbs) plays a woman passing as a man in order to work and survive in 19th century Ireland. Some thirty years after donning men's clothing, she finds herself trapped in a prison of her own making.

Rated R for some sexuality, brief nudity and language.