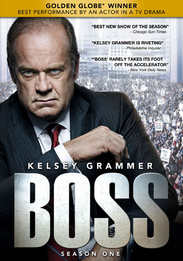 Mayor Tom Kane (Golden GlobeÂ® winner Kelsey Grammer) is King of Chicago, and he rules his domain with an iron fist. Deception, scandal, and betrayal go hand in hand with Kaneâs form of politics. As long as he gets the job done, the people of Chicago look the other way. Despite being the most effective mayor in recent history, Kane is hiding a dark secret. A degenerative brain disorder is ripping everything away from him, and he canât trust his memory, his closest allies, or even himself. Watch as Kane viciously fights battles on all fronts in "Boss" Season 1.