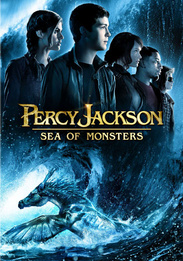 Based on the publishing phenomenon, Percy Jackson: Sea of Monsters continues the young demigod's epic journey to fulfill his destiny. To save their world, Percy and his friends must find the fabled and powerfully magic Golden Fleece. Embarking on a treacherous odyssey into the uncharted waters of the Sea of Monsters (known to humans as the Bermuda Triangle), they battle terrifying creatures, an army of zombies, and the ultimate Evil.