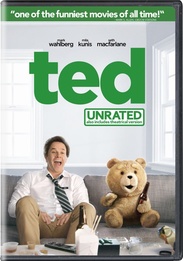 In this live action/CG-animated comedy, Family Guy creator Seth MacFarlane tells the story of John Bennett (Mark Wahlberg), a grown man who must deal with the cherished teddy bear who came to life as the result of a childhood wish... and has refused to leave his side ever since.

Rated R for crude and sexual content, pervasive language, and some drug use.