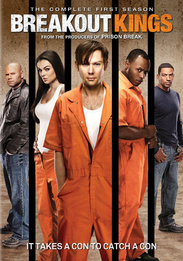 Suspenseful storylines and fascinating characters drive this riveting new series from the creators of Prison Break. To help capture dangerous fugitives, two veteran federal marshals, Duchamp and his volatile Partner Zancanelli, recruit three convicts who are master escape artists themselves. Lloyd leads the way as the genius with a wickedly sarcastic sense of humor and a talent for predicting behavior. Joined by street-smart "entrepreneur" Shea, and sexy, expert tracker Erica, these Breakout Kings are out to prove it takes a con to catch a con.