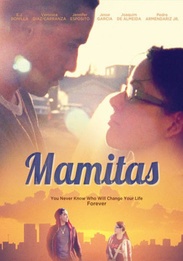 High school bad-boy Jordinâs carefree life of parties, fights, and girls in East L.A. will get rocked after crossing paths with an unusual new girl at school. Through their unlikely romance he will uncover a mystery about his past that will forever change how he looks at his future. With superb performances, Mamitas is a story about finding yourself in the most unlikely of relationships.

Rated R for some sexual references and teen partying.