Chase the Stars: The Cast of the Hunger Games 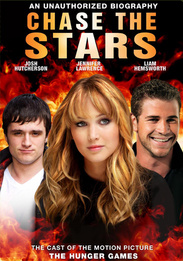 The Hunger Games has become one of the worldâs most popular series in the last few years, with millions of copies of the novels being sold worldwide. Now, the series is as big as ever with the film franchise and star power of Jennifer Lawrence, Josh Hutcherson and Liam Hemsworth. Catch The Fire: The Stars of The Hunger Games provides an in-depth look at Katniss, Peeta and Gale like youâve never seen them before!