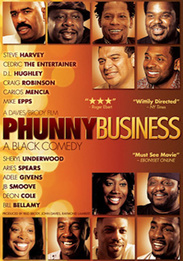 For a decade, Chicagoâs ALL JOKES ASIDE was the premiere Black Comedy Club in the country giving early exposure to most of the important young comedians including: Bill Bellamy, Cedric the Entertainer, Dave Chappelle, Deon Cole, Earthquake, Mike Epps, Jamie Foxx, Adele Givens, Steve Harvey, D.L. Hughley, Bernie Mac, Carlos Mencia, MoâNique, Craig Robinson, Chris Rock, JB Smoove, Sheryl Underwood and George Wallace to name a few. Using a mix of stand up and interviews with the comedians who performed there, PHUNNY BUSINESS chronicles the rise and fall of ALL JOKES ASIDE, takes an in-depth look at the man behind it all and salutes the legendary showcase for its contribution to comedy history.