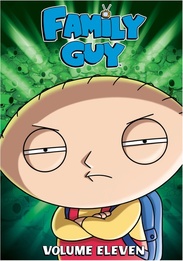 In this hysterical assortment of 23 uncensored Family Guy episodes, Peter has another painful encounter with the angry Giant Chicken, Quagmire tries to get giggity with Meg, and Brian and Stewie are beside themselves when they travel back in time to the showâs pilot episode. Itâs a side-splitting blast to the past packed with celebrity guest voices, including Cate Blanchett, Ricky Gervais, Ellen Page and Ryan Reynolds!