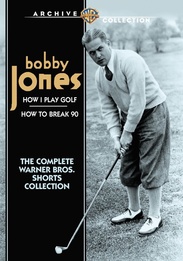 Robert Tyre Bobby Jones, Jr., perhaps the greatest amateur golfer in the history of the sport, is here to show you the secrets of his game. In between winning his legendary Grand Slam in golf and the Masters tournament, this original sports superstar shot a series of instructional shorts in two series for Warner Bros, "How I Play Golf" and "How to Break 90". The studio's selection of students for these shorts are a true Hollywood who's who - luminaries like James Cagney, Edward G. Robinson, Loretta Young, WC Fields, Joan Blondell, Douglas Fairbanks, Jr, and Glenda Farrell are but a few of the stars learning to swing in these short sportaculars. As directed by George Marshall, the Bobby Jones shorts combine instruction with narrative to create a one-of-a-kind cine-sensation -- one that will be eagerly enjoyed by sportsman and film fan alike.