Something in the Air 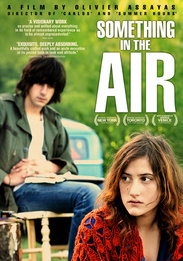 Returning to feature filmmaking after his brilliant 2010 mini-series 'Carlos,' in Olivier Assayas' 'Something in the Air' it is 1971 and Gilles (newcomer ClÃ©ment Metayer) is a graduating high school student in Paris deeply involved in the counterculture of the time. As Gilles begins to realize that his interests lie more in the revolutions in art and music, he finds himself pulled into ever more dangerous political protests by the people around him, especially his radicalized girlfriend, Christine (Lola CrÃ©ton). After a vandalism attack against their school goes terribly wrong, Gilles and his friends flee to Italy, where they spend a bohemian summer in the countryside drifting between parties, rallies and agitprop film screenings. Amidst this whirlwind of politics, art and sex, the group discovers that at their age every day holds new possibilities, and life awaits the curious.