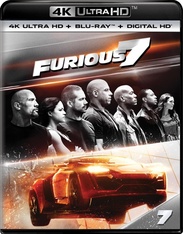 After defeating Owen Shaw and his crew, Dominic Toretto (Vin Diesel), Brian O'Conner (Paul Walker) and the rest of the crew are able to return to the United States and live normal lives again as they had wanted. However, Owen's older brother, Deckard Shaw (Jason Statham), is after Dom and his crew, seeking revenge for his brother's death and putting the entire crew in danger once more.