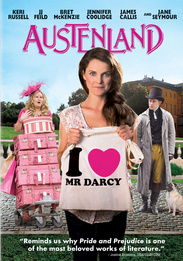 âAUSTENLANDâ is a romantic comedy about 30-something, single Jane Hayes (Keri Russell), a seemingly normal young woman with a secret: her obsession with all things Jane Austen. But when she decides to spend her life savings on a trip to an English resort catering to Austenâcrazed women, Janeâs fantasies of meeting the perfect Regencyâera gentleman suddenly become more real than she ever could have imagined. Based on the novel by Shannon Hale (who also co-wrote the script), the film was written and directed by Jerusha Hess (writer, Napoleon Dynamite) and produced by Stephenie Meyerâs Fickle Fish Films.