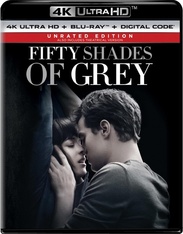 FIFTY SHADES OF GREY is the hotly anticipated film adaptation of the bestselling book that has become a global phenomenon. Since its release, the âFifty Shadesâ trilogy has been translated in 52 languages worldwide and sold more than 90 million copies in e-book and printâmaking it one of the biggest and fastest-selling book series ever.

Rated R for strong sexual content including dialogue, some unusual behavior and graphic nudity, and for language.