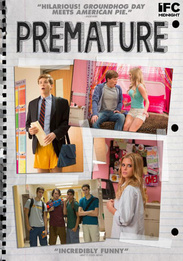 It's 'American Pie' meets 'Groundhog Day' in this hilarious and tender coming-of-age comedy. Rob is facing the biggest day of his life. He needs to nail a college interview ensuring his admittance to his parents' beloved alma mater, keep his cool when life-long crush Angela (nicknamed 'After School Special' for a reason) finally seems to show interest, and deal with his best friends as they realize their high school days are ending. As pressure mounts, something weird happens. He finds himself reliving the day's events over and over again. Is Rob stuck in a dream? Experiencing dÃ©jÃ  vu? Having a psychotic break? Whether it's finding a way to get into Georgetown, into Angela's pants, or having an even bigger epiphany, Rob must figure out how to break the cycle before losing his mind.

Rated R for strong crude and sexual content throughout, language and some drug use.