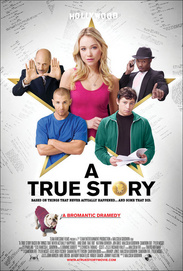 Matt and Mike are two broke Hollywood writing partners and best friends, waiting for their big break. When Mike's bombshell man eating ex-girlfriend comes back into his life, Matt will do anything to save his only friend from another broken heart, including jeopardizing their friendship and dreams of Hollywood success. A True Story is a film within a film...within a film, as we see the real side of Hollywood as lived in by struggling actors. The story is not, however, inclusive to the LA scene. It's a story about resisting temptation and maintaining integrity. It's about keeping track of what's really important in life, the people that really love you and would do anything for you, however imperfect they might be.