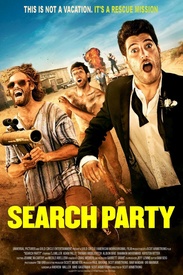 24 hours ago, Nardo (Thomas Middleditch) was standing at the altar next to the love of his life. Now he's shivering in just a pair of gold leggings in the Mexican desert, and the only men who can save him are his best friends (TJ Miller, Adam Pally). Writer Scot Armstrong (Road Trip, Old School and The Hangover: Part II) makes his directorial debut in a comedy that follows a rescue by the guys you call when you've run out of all other options.

Rated R for language throughout, drug use, graphic nudity, and sexual content.