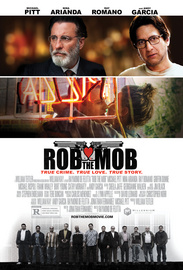 ROB THE MOB is the true-life story of a crazy-in-love Queens couple who robbed a series of mafia social clubs and got away with it...for a while...until they stumble upon a score bigger than they ever planned and become targets of both the mob and the FBI.

Rated R for pervasive language, some sexual material and brief drug use.