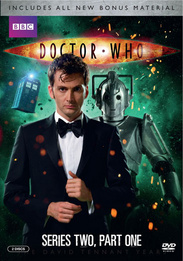 David Tennant (Broadchurch, Harry Potter and the Goblet of Fire) kicks off his triumphant reign as the Tenth Doctor with these first seven thrilling episodes from the second series of the re-booted Doctor Who! Alongside his companion Rose (Billie Piper, Secret Diary of a Call Girl), he must help Queen Victoria battle the Empire of the Wolf and battle an invasion of Earth from the evil Cybermen! Thrills, heartbreak, and terrifying monsters keep Doctor Who are around every corner of this huge fan favorite!