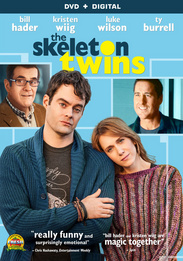 Kristen Wiig and Bill Hader light up the screen as Maggie and Milo, estranged twins who are reunited after ten years of being apart. With an irresistible mix of humor and heart and a stellar supporting cast including Luke Wilson and Ty Burrell, The Skeleton Twins follows Maggie and Miloâs unforgettable journey to reconnect, as they realize that the key to fixing their lives may just lie in repairing their relationship.

Rated R for language, some sexuality and drug use.