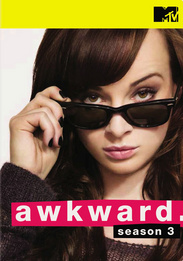 Awkward. is about the specific incidents in our formative years that define us, sometimes for the best and sometimes for the worst. In seasons one and two, Jenna tackles âWho am I?â and âWho do I want to be with?â Now, coming into her junior year, Jenna for the first time is confronting the monumental question of âWho do I want to be?â In the wake of her romance with Collin, she begins to question the stability of her relationship with Matty, and whether her straying is a sign of something deeper. But after a surprise public kiss shakes her world, there is no going back. One mistake will make things awkward-er than ever, and Jennaâs personality makeover will leave her friends and family wondering who this new Jenna is. Will her flirtation with her wilder side leave the ones she loves in her wake, or will she learn from lifeâs tests and come out stronger than ever?