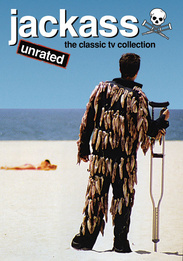 For better or worse, MTV funded a bumbling cast of idiots to play with poo and dress in a variety of men's undergarments. Never before has arrested development looked so much fun as the cast of Jackass make it. From stapling Jackass on their rear-end to mounting magazine stands in gorilla costumes, Johnny Knoxville, Bam Margera, and the rest of the gang show us what it takes be a Jackass!