How I Met Your Mother: The Whole Story 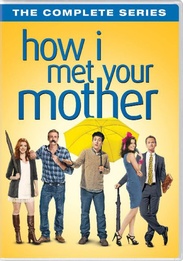 You don't have to "wait for it" any longer... the complete series collection of HOW I MET YOUR MOTHER is finally here. Suit up for all nine legendary seasons of the slap-happy show that took TV comedy to hilarious new heights. Join Barney, Robin, Marshall, Lily and their romantically challenged best friend Ted for more than two-hundred truly awesome episodes. Relive all the inside jokes, crazy time-jumps, never-saw-that-coming plot twists and classic long-running gags: from the Bro Code to doppelgangers to Robin Sparkles to the infamous slap bet between Marshall and Barney.