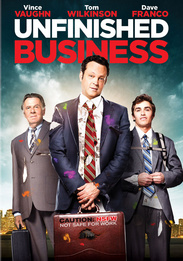 A hard-working small business owner (Vince Vaughn) and his two associates (Tom Wilkinson, Dave Franco) travel to Europe to close the most important deal of their lives. But what began as a routine business trip goes off the rails in every imaginable â and unimaginable â way, including unplanned stops at a massive sex fetish event and a global economic summit.

Rated R for some strong risquÃ© sexual content/graphic nudity, and for language and drug use.