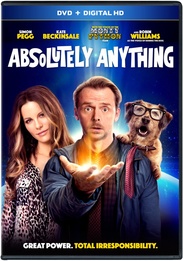 In this hilarious sci-fi comedy, ordinary schoolteacher Neil Clarke (Simon Pegg) is granted extraordinary powers by a group of mischievous space aliens (voiced by the legendary Monty Python team) as a test of mankind's worthiness. Little does Neil know that the fate of our planet hangs in the balance as he struggles to control the chaos he creates with every wave of his hand. Co-starring Kate Beckinsale and Eddie Izzard â and featuring the voice of Robin Williams as Neil's loyal canine companion â Absolutely Anything proves that with great power comes total irresponsibility!

Rated R for language including sexual references, and brief nudity.