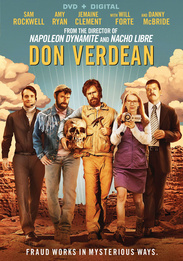 Hired by an ambitious small-town pastor to find sacred relics in the Holy Land, a self-proclaimed Biblical archaeologist comes up short and his attempt to cover up his failure fuels a comic conspiracy from the filmmaking team behind Napoleon Dynamite and Nacho Libre.

Rated PG-13 for crude and suggestive content, some language and brief violence.